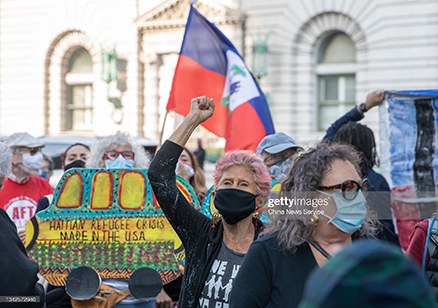 Deportations To Haiti Could Reach 1,000 Per Day

That’s according to officials of the Haiti National Migration Office (ONM) and the International Organization for Migration (IOM), Jean Negaud Bonheur Delva and Giuseppe Loprette, respectively.

“This is the challenge,” said Giuseppe Loprette, responsible for the IOM in Haiti. “I take this opportunity to appeal to other countries to consult the Haitian authorities before planning flights because there is also a limit to the capacity to receive people.”

Loprette argued that Haiti’s international airport also has limited space. And security situations should be avoided as much as possible.

“The migrants must be given time to arrive and receive assistance,” argued Loprette.

Each migrant is allocated the equivalent in gourdes of 120 US dollars or 12,000 gourdes.

“We have limited means to deal with all of this, ” said a worried Loprette.

Between September 19 and 29, 2021, the United States, operating 7 to 8 flights per day, have already expelled 5,405 Haitian compatriots from their territory. There are 1,238 children among these migrants returned to Haiti.

Mexico and the Bahamas will soon follow suit, Delva said.

Haiti continues to face an escalation in violence and insecurity, with at least 19,000 people internally displaced in the capital Port-au-Prince in the summer of 2021 alone, (IOM,, the UN Refugee Agency (UNHCR), the United Nations Children’s Fund (UNICEF) and the UN Human Rights Office (OHCHR) said.

They all are calling on states to refrain from expelling Haitians without proper assessment of their individual protection needs, to uphold the fundamental human rights of Haitians on the move, and to offer protection mechanisms or other legal stay arrangements for more effective access to regular migration pathways.

Well over 20 percent of girls and boys have been victims of sexual violence in Haiti, the groups said. In addition, nearly 24 percent of the population, including 12.9 per cent who are children, live below the extreme poverty line of US$ 1.23 per day.

Some 4.4 million people, or nearly 46 percent of the population, face acute food insecurity, including 1.2 million people who are in emergency levels and 3.2 million people at crisis levels. An estimated 217,000 children suffer from moderate-to-severe acute malnutrition.

“This situation is bound to worsen as a result of the August 14th earthquake straining any capacity to receive returning Haitians,” the statement added. “Conditions in Haiti continue to be dire, and not conducive to forced returns.”